Need a funny t-shirt for cheap? Plus, win one!


What makes your favorite T-shirt? All my favorite tees are the funny, clever ones. Headline Tees asked me to do a review on one of their hilarious T-shirts. Of course I obliged. They are right up my brain alley, between the cognitive part and the pleasure part. You know the G spot. The Giggle spot, pervs!

It was a difficult task to pick just ONE t-shirt. I loved a ton of them. I'll go over some of my favorites and then show you the one I ended up with. 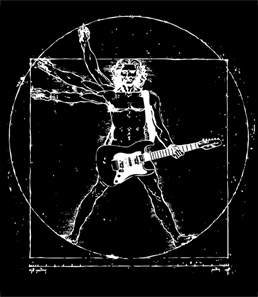 The History of Headline
"Headline Shirts was founded in 2005 in a dusty, ramshackle garage in San Francisco. (All of which is true except the thing about the garage.) Having started at the peak of the Bush years, our early t-shirt designs reflected the mood of the country -- politically charged and kind of crazy. Before long, though, we found politics to be a bit polarizing. So we set about making intelligently funny tees that everyone could enjoy -- be they a pussyfooting Hollywood liberal or a gun-crazed redneck from Waco."

"Davinci Rock Man"  This was  patiently waiting for the right hands and brain to put it together. How perfect is the original position of the Davinci Man for this spoof? Too perfect. I'm glad someone put it to good use, as this is pretty clever. I know some anatomy and physiology majors who would   appreciate the humor in this one, as much as I do. 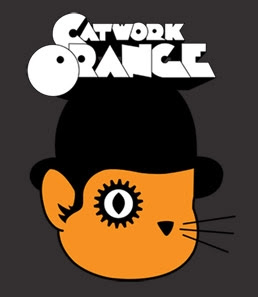 "Catwork Orange" This was my second favorite. Yet another cat-chy mashup of two things I love, cats and The Clockwork Orange. How funny to use a cat as the focal point in this. Cats are indeed about as docile as the main character of this movie, so it seems very fitting to me. Along with the similarity that when loved and tamed, he as well as most cats learn to behave too. I appreciate a good fusion of vintage film and pop art, and I was very close to getting this one, but my chest had other plans! Another awesome t-shirt I can't flaunt due to the sizes offered. I would have gotten the men's version, but It was too large of a design for my flaunting capabilities. Though, all was not lost. I found one that I loved equally.
I do wish they printed these in poster format, as I would proudly display it on my wall. 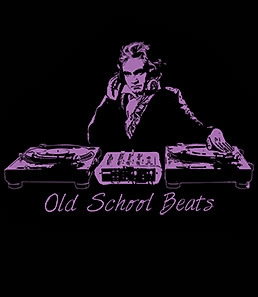 And finally, the funny I ended up with: "Beethoven old school beats" I have a huge hodge podge on my Spotify, and part of that is Classical music. One of my favorites being Beethoven. This is a cleverly exaggerated twist on the term "old skool" Normally this refers to nostalgia from decades ago, not centuries. Imagine what it would be like if he came back and played some of his old skool beats. I have heard electro being fused with classical. I wonder if he would approve. Hmm, interesting to think about, but I bet he would eloquently say it was equivalent to that of manure ridden horses hooves or another creative comeback from centuries ago.

I chose this t-shirt for it's design, creativity and color. My chest approves of the fit and it's thin and soft. Plus, it's "100% sucka free", so you really can't go wrong. Don't forget to wear these t-shirts with pants, for a better fit! It says so on the shirt.

Their descriptions are pretty amusing too.

"I'm really glad we got to catch this DJ. German techno isn't usually my scene but this guy spins a lot of old school beats. No, I mean, like, really old school beats. Let's just say he's been spinning since before E came on the scene. Matter of fact, I don't even think pharmaceutical drugs had been invented yet.
Pretty sure he got his start as the house DJ for Emperor Leopold II. I heard he once played this legendary set at Ibiza. I can't remember which club it was, but I'm pretty sure the island was ruled by Napoleon back then, so it was a totally different scene. He loves to spin 90s tracks, but it's probably not the 90s you're thinking of." 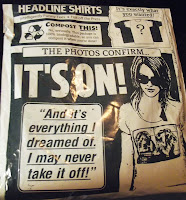 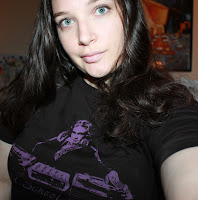 I also thought the packaging was neat. It looks like a page ripped out of a comic book. I love my new tee! :)
The prices are just right at $24, and they have specials for $14 on a regular basis.

Important things:
• Super Soft 100% 30/1     combed ringspun cotton
• Eco Friendlier Ink• Screenprinted tagless neck  - I love this, all shirts should be tagless. To go toward the cause of itchless people everywhere. Is that a thing? It should be. • Ships in 48 hours

The sizes are normal, sans the fact that women's fit is really Juniors/babydoll fit.

Check out more t-shirts at  http://www.headlineshirts.net/ and like their Facebook for promotions, while you wait for your chance to win one of your own! Or if you want to buy one, You will get $5 off if you sign up for their newsletter.